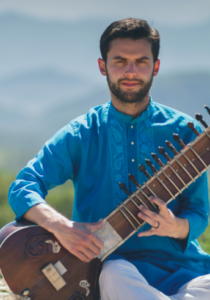 Will Marsh has been a dedicated student of the sitar since 2006. He was initiated into the rich classical tradition of North Indian music by Ustad Aashish Khan (eldest son of Ustad Ali Akbar Khan) while a student at the California Institute of the Arts. His commitment to this art form has made Will a member of a new generation of serious Indian musicians from the United States. He has also had the privilege of studying with sitar master Roshan Jamal Bhartiya, from Mumbai India. Will completed his MFA in North Indian music from Cal Arts in 2013. Will is also an exceptional guitarist and as such, his sitar music is unique to his deep, creative spirit and draws influence from literally the entire world. His intuitive touch for sacred, innovative, melodic improvisation brings bliss and tranquility to his listeners. Will’s musical language covers a huge scope, from Western Classical Music and Jazz to Balinese Gamelan and Persian setar. Currently, Will resides in Northern California where he works with a variety of ensembles, teaches, and performs internationally.