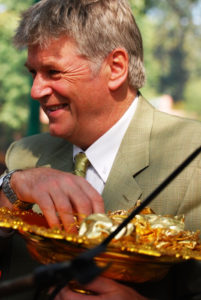 Richard Dixey holds a Ph.D in Biophysics from London University, an M.A. with distinction in the history and philosophy of science from London University, and a B.A in Cell Biology from Oxford. In 1979, he was appointed the Director of the Bioelectronic Research Unit at St Bartholomew’s hospital in London, a position he held for fourteen years before founding and becoming the Chief Executive of Phytopharm PLC, a biotechnology company that listed on the London Stock Exchange in 1997. Richard retired from Phytopharm in 2007.

Since 1972, through his interest in Buddhism, he has worked on the interface between scientific and spiritual perspectives and has travelled extensively in the Himalayas, India and South East Asia. He and his wife Wangmo, who is the eldest daughter of
Tarthang Tulku Rinpoche, are co-directors of the Light of Buddhadharma Foundation, which is dedicated to revitalizing the Buddhist culture of India. He is also on the faculty of Dharma College in Berkeley and is an advisor to the Khyentse Foundation.

A Nyingma Mandala Retreat at Ratna Ling We are happy to announce the first of a series of special retreats this year – the Nyingma Mandala Retreats, in person at Ratna Ling.  We are excited to be opening to groups as state coronavirus restrictions ease: Dharma College Annual Practice Retreat: A Master-Key to Being Human by Dharma College in Berkeley. What a year we have had to face the Corona pandemic. Each of us has…